Peter Lougheed Leadership Scholar, Xaverie MacLennan, takes us through the process on how she came up with her Stretch Experience.

Growing up, I was blessed with good community, excellent neighbors, and many interesting opportunities. One such opportunity came in the form of a trip to Thailand, organized by the local youth group. I was thrilled to be able to take part in a trip with what I believed (at the time) to be an important mission and thus, fully committed myself to fundraising and preparing for this adventure to help kids on the far side of the globe. However, as we were in the final stages of preparation I learned that the local Emergency Youth Shelter, known as the Sunrise House, was at risk of closing due to financial shortfalls.

Hearing that Sunrise House, which aims to provide emergency shelter to youth from age 12-17 was in dire straights, pulled me out of my excited trip-preparation-trance. It was difficult for me to digest the fact that my youth group had raised a large sum of money to cover travel expenses while there was a very real possibility that kids my age would become homeless on the streets of my hometown. Thinking about this filled me with guilt, and shame. These feelings grew as it became clear that our trip was firmly rooted in the category of “volunteerism,” in that I got to travel, experience a new culture, and generally have a fun trip- while the locals had to shoulder the responsibility of taking care of us while we “helped” in jobs that could have been done (and done better) by local labourers.

Sunrise House did shut their doors for a period of time, but has since reopened and is once again busy providing a valuable service to the community.

After the Thailand trip, I compared what I had accomplished there with the vital role Sunrise House plays in my home community. 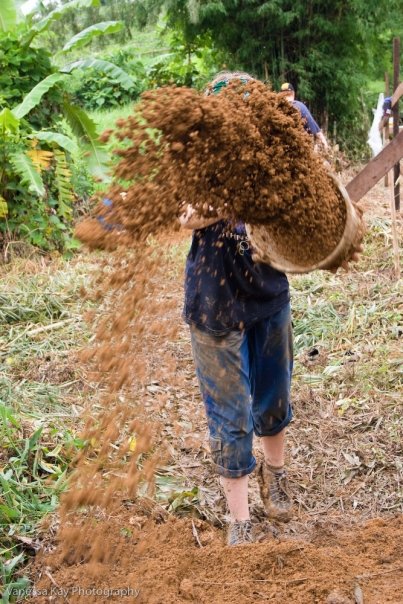 (The author in Thailand contributing to a work project. Photo courtesy of Vanessa Kay Photography)

This reflection helped me to learn what is intrinsically important to me. At that time I decided that if I ever was going to change the world, I was going to start at home and work out from there. So, when the Peter Lougheed Leadership College first posed the question:

“How will you change the world?”

I began rolling around ideas that pertained directly to my home community. However, I recognized the criteria all scholars had to meet; the leadership skills I had learned over the previous year must be practiced, my community must benefit significantly, and the experience had to stretch me beyond my comfort zone.

With these criteria in mind, I knew only one thing for sure: My Stretch Experience would be based in Grande Prairie, Alberta. Now the challenge I faced was to come up with a Stretch Experience that would introduce me to a new network and expel me far from my comfort zone even though I would be completing it in the most familiar place on Earth; home.

I contemplated working with Big Brothers Big Sisters… but I had already been heavily involved with this organization, so that was out. I then considered working with Trumpeter Swan conservation in the area… However I knew that wouldn’t pull me from my comfort zone as I have been doing conservation projects throughout my degree. After scrapping a few more ideas because they were too tightly tied to my prior experiences and connections, I was starting to wonder whether it would be possible for me to complete my Stretch Experience in Grande Prairie.

I began losing sleep pondering, “ what I am passionate about that would educate and invigorate me while also benefiting my community?” But my sleepless nights weren’t solely dedicated to Stretch Experience worries and simultaneously thoughts about the upcoming municipal election began to swirl in my mind as I nodded off thinking about photo radar tickets, potholes, and why my current City Council only has two women on it… And like lightning, an idea struck.

As I considered the presence of two women on a Council of eight (not including the Mayor, also male) who represent a population that is 50% female, I realized there was a glaring problem with Grande Prairie’s City Council: gender disparity. To be frank, this ticked me off! I know many wonderful female leaders in Grande Prairie; how could we have such imbalance on City Council?

It became clear that this needed to be addressed, and who better to address it than me (a biology nerd with limited political expertise and minimal knowledge regarding gender politics)?

Now, the thought of being involved in politics terrifies me, and the idea of bringing gender parity to the forefront of conversation petrifies me. Yet, this truly is the perfect intersection between leaving my comfort zone, and being able to benefit my community by advocating for and encouraging more diverse leadership in the future! I took this idea and ran with it, and began molding it into what has now become my Summer 2017 Stretch Experience:

I am very excited to tell you more about this project in coming posts, so stay tuned as I share more about the steep learning curve that is bringing gender parity to the forefront of electoral conversation in Grande Prairie!

I’m curious to know how YOU got involved with projects you are passionate about? Was it a late night realization that sparked your fire or was it a lifetime of involvement that snowballed from one project to the next? Let me know!