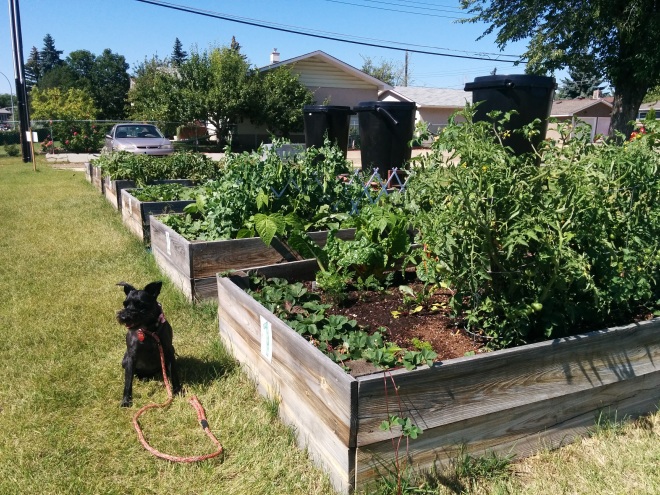 Top left – a field day with Organic Alberta, top right – a fellow volunteer and I at an Alder Food Security Society resilience festival event, center – my dog at a Food4Good community garden.

You might not expect what’s on your plate to be inherently political but you also wouldn’t expect David Suzuki being awarded an honorary degree to be particularly politically changed either but here we are. Amanda Rooney here! Read on to hear about how I became interested in food politics and what I’m doing for my summer stretch.

The politics surrounding food production and consumption was first revealed to me in my first year at the U of A when I took AREC 173: The Plate, the Planet and Society. I realized that food is where issues concerning the environment, race, class, gender, global and local politics all coalesce. This class had a community service learning component where I was placed with the Alder Food Security Society. I learned that $31 billion in food is wasted in Canada every year and in the face of this still 1 in 8 Canadians experiences food insecurity, characterized by worries about getting food to actually resorting to going hungry. My interest in food politics was sparked. Since then I’ve had the opportunity to sit on the board of Sustainable Food Edmonton, spend a summer working for Organic Alberta, as well as Food4Good.

These experiences have revealed that food and food activism is more complex than I could’ve imagined. The ways in which societal inequalities are replicated in all of the nooks and crannies of our food system are complex. The opportunities we have to transform the food system are also complex and at times seem to compete with each other. For example, artisanal food movements that challenge the unsustainable industrial agriculture complex are often unable to be accessible to all people.

This is why I encouraged my forum to pursue a vodcast topic around food and why I applied for a research grant to look at Edmonton’s food activism landscape this summer. I hope that in speaking to various food activists around the city I can gain insight into how Edmontonians can create a food secure future for everyone from farmers to consumers.

I’ve just begun my preliminary research, literary review and ethics application but I came across a term that is both ‘punny’ (because is sounds like gastronomy) and I really like – gastro-anomie. The term anomie is used in sociology to describe a sense of directionlessness resulting from breakdown of norms. I think that Gastro-anomie is a good way to describe the disconnection from our systems of food production that increasing industrialization, globalization and fast-paced lifestyles have generated. Our vodcast demonstrated how food is an important part of identity, what does it mean when we lose touch with a part of human nature that is so closely connected to identity and interpersonal relationships?

I’m terrified to be pursuing something so academic since I’ve mostly done non-profit work but am excited to learn more about food justice in Edmonton, scholar activism, and whether I can be trusted with research funding.