^I’m the guy in the middle ready to back spot, not Yoshihiro!

A project on a schedule

It’s almost August, I still have a bunch of hours to hit (sigh), oh well, not really a big issue.  Tip #1 for my future PLLC peers is not to focus on the hours.  Sure, you want to hit that 200 hour mark, but depending on your project, you might want to focus on the outcome of the project (where it’s headed) rather than the your time requirement from the start.  I’ll still hit my requirement, but most of my hours will be in the last month.

The basis of said project

My Project revolves around the culture I come from: Blue collar and labour intensive rural Alberta.  Growing up, I only knew blue collar people:  Welders, patch workers, riggers, loggers, truckers, labourers, etc.  A common ailment across all of these jobs, is that they all tend to have a number of injured individuals.  There are a ridiculous  amount of people who said “Oh, I’ve had this lower back pain for years” or “yeah, my shoulder has a sharp stabbing pain every time I lift it up above my head.”

Why is this so common among so many different trades?  Why does almost everyone have an old injury?  I found out later in life when I became a worker that the only advice you’re ever given towards lifting objects is: “bend your knees, not your back.”  What kind of lifting advice is that?  How does that help my shoulders?  Have you ever tried to keep your back straight? It’s practically impossible unless someone is telling you whether or not your back is.

Therefore, when deciding what to do for a stretch, it came pretty easy: I want to help reduce strain to peoples backs and shoulders in industrial workplaces by providing a video that USES BLUE COLLAR LANGUAGE to explain efficient lifting cues and techniques.  I am doing this by

A. Going out to sites, jotting down notes about everyday labour tasks,

to which I will then

B. Approach professional coaches and physiotherapists to come up with legitimate information to back up my video.

Where after some trouble shooting and editing I will then

C. Present it to Alberta Health Services (AHS) in August!

What have I actually done?

Back in May, I kinda had money issues and not much was done, not gonna lie.  I went and followed a couple of the guys from an arborist company I’m doing casual work for, and I sent out emails to AHS.

In June, I got super productive.  I have a decent enough network already, but I also like to volunteer, so I went down to the International Power-lifting Federation (IPF) worlds competition in Calgary.  I spent 4 days down there, and became mildly famous for all the spotting/loading I did with a bunch of world class athletes.  Great time, and it allowed me to meet up with Avi Silverberg from mystrengthbook.com and ask him to answer some questions in a couple months time for my project.  Avi was chosen to be one of the coaches chosen by Canada for our athletes.

My Verifier (Shane Martin, another power-lifting coach and athlete) and Avi are important individuals to get information from in addition to physiotherapists because they work with, and coach industrial individuals all the time.  On top of basic cues, they’re accustomed to working with individuals who work in the field and understand where they tend to get hurt more often, or what muscles might be weaker.

July I went out with both of my brothers on two separate dates.  Derry (younger, Journeyman instrumentation) and I went out to a Battery shutdown near the Brazeau dam.  It was funny because the contact he set me up with for the area requested that I don’t tell anyone what I’m there for.  So I got to pretend to be my little brothers brand new apprentice for a day.

Do you know how often apprentices razz their Journeyman harder than the local operators?

Hilarious day, because a bunch of operators were confused on why he was letting me give him such a hard time.

Great information though, I used to work in the patch myself, but you forget about all the little quirks and stuff you have to do when you’re in a shack or out in the field, especially with full PPE on.

My older brother (Scot, Hydro vac driver/operator) and I went out for Arc Resources near Buck Creek last week.  Pretty decent day, I actually used to do this stuff with said brother 8 years ago almost to the day.  So I did not really see too much in the way of new, however still worth the trip.

Past week(s) and Moving Forward

I started emailing physiotherapists the past week (cheers Dr. MFP), and I’m set to meet up with 3 this week, plus my verifier Shane.  I hope to meet up with 2 more physicians next week, and I’m supposed to video call Avi as well.

I have a wedding this August long, but I still hope to actually type up a rough draft video by Monday!  With this I plan to tape Tuesday!

I’m moving pretty quick in steps these next two weeks, so i’ll be presenting my rough draft video to some patch boys, get their feedback, get more advice from some more physicians and then have a good copy by mid august!

My sister-in-law Jena (Derry’s wife) works at the Drayton Valley hospital, she told me that this kind of video/metaphorical and language-you-can-relate-to styled video would be good in a hospital setting.

She indicated that they have to watch a video from AHS every year that she (and a lot of others apparently) don’t find particularly useful.

I tried to jump on this and come follow her at work too, but was denied by the head nurse who said that they were on “outbreak” right now and that visitors were restricted.  So this may be a “market” I could pursue further after this video is done!

To avoid red tape and paper work, I avoided taking pictures out in the field, so the only pictures I have to share with you are from IPF worlds!  Feature photo is me back-spotting the 74kg Open class! (the squat record was beaten 3 times between 2 lifters.

On the right is Kelly Branton, Canada’s own, who came in 2nd. 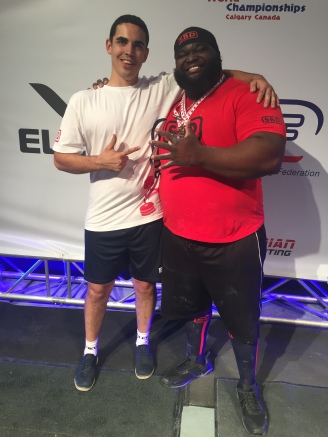 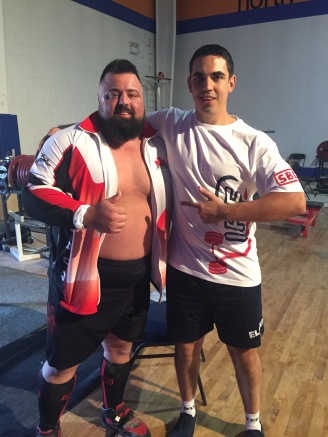